Instagram tests new age verification tools for 18 and over accounts, including video selfies

Instagram has been tinkering for years looking for better ways to manage and engage with younger and older users — not just to be more compliant with regulations, but to better target age-appropriate and relevant content and advertising to them. In the latest move, the Meta-owned platform is testing a new set of features — video selfies, vouching from adult friends, and providing an ID — designed to verify when people say they are 18 and older.

The test covers U.S. users, who will now potentially see these options if they try to change their age from under 18 to 18 and over.

There are two basic use cases for this new verification system: adults who have registered as teens by mistake and trying to enter their correct age; and teens who are trying to circumvent the platform’s age-appropriate restrictions. Instagram’s made periodic modifications to those restrictions, including making accounts for younger people to default to private mode.

Notably, this doesn’t change the check at the registration process where you have to enter your birthdate. According to the company’s rules, you need to be at least 13 years old to sign up for the service.

In the U.S., when you’re changing your age from under 18 to 18 and over, you’ll be prompted to select one of the options mentioned above. You can provide an ID card like a passport or a driver’s license for verification. The company will store your ID for 30 days on its servers before deleting it. 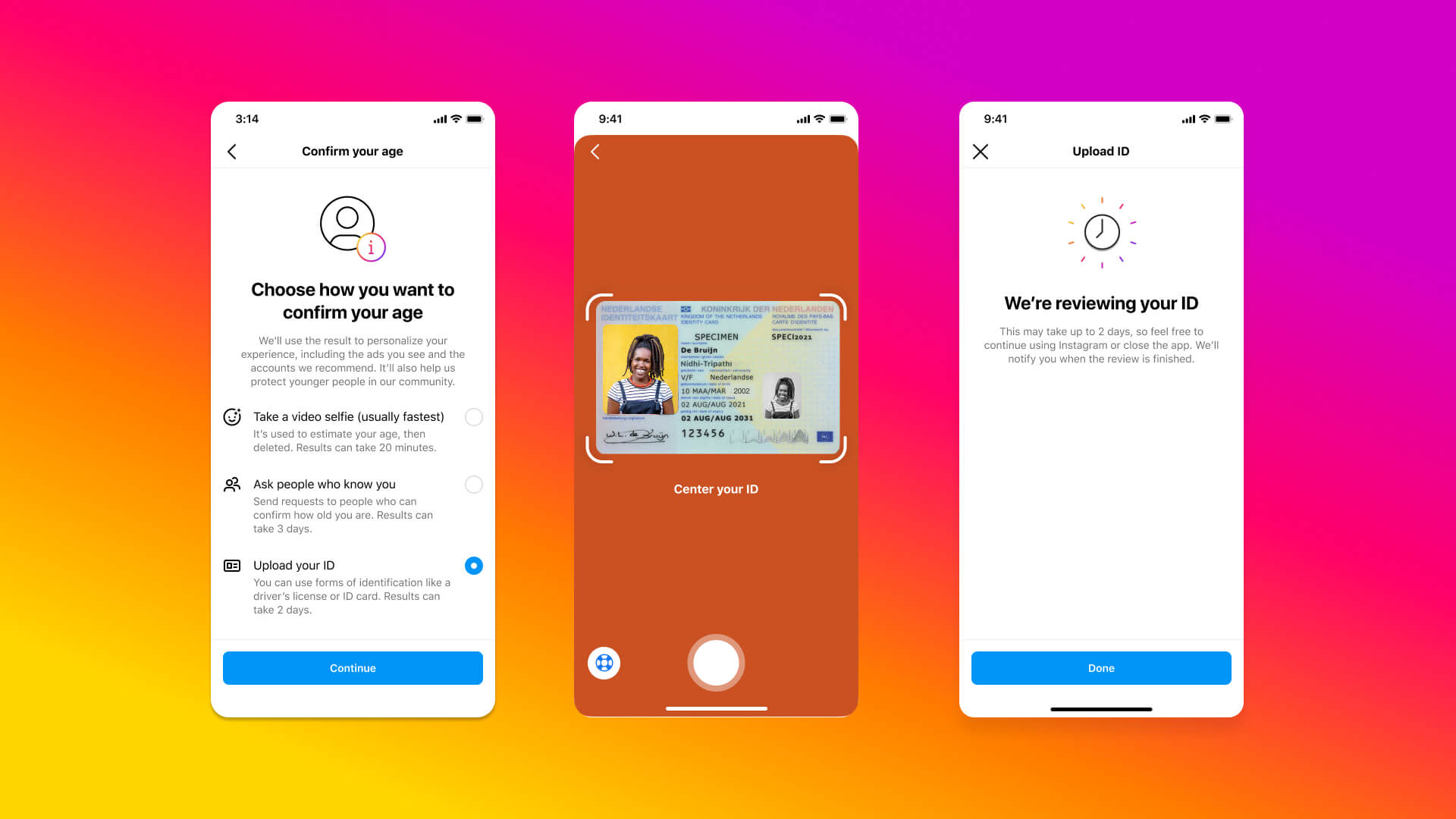 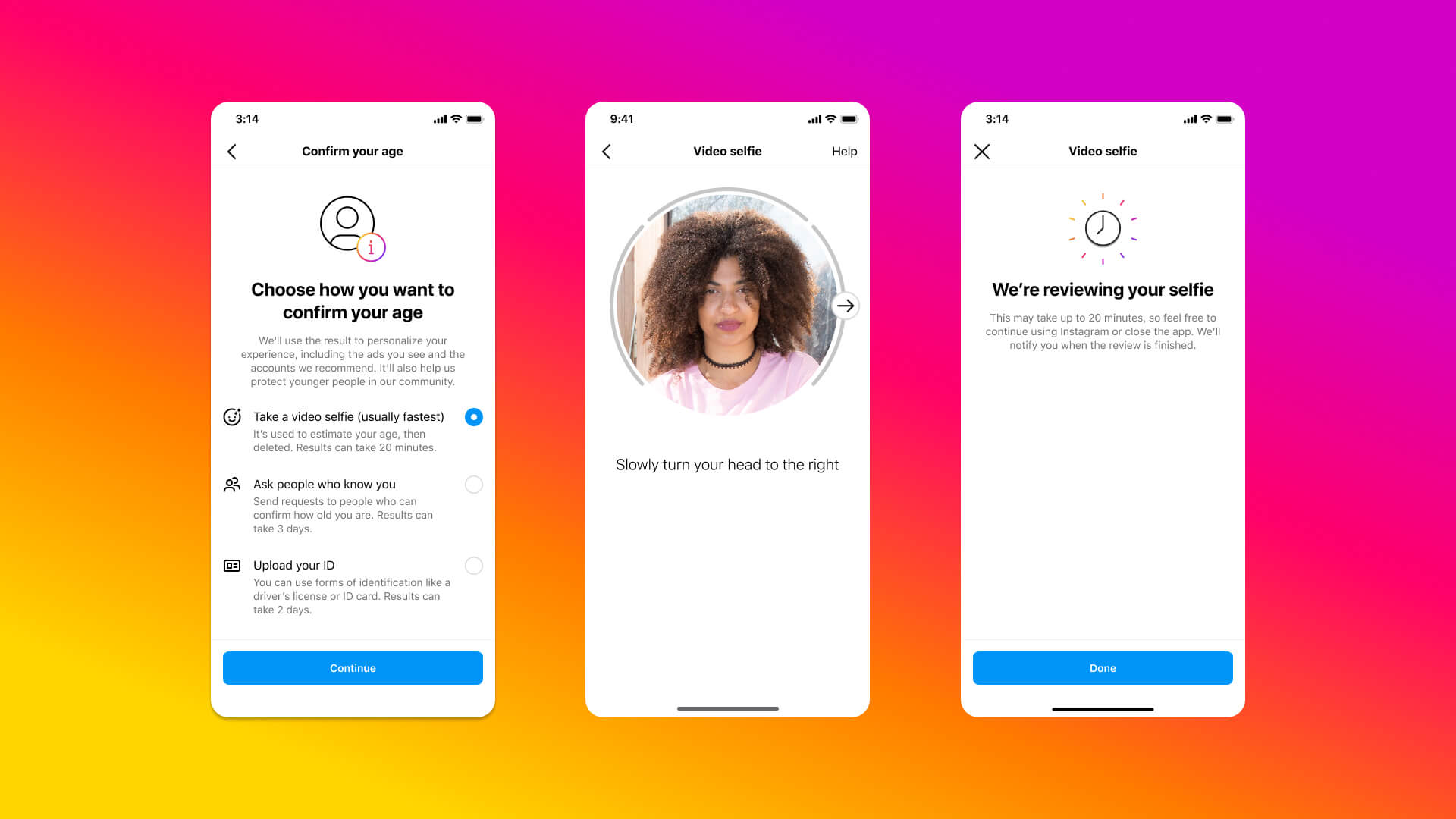 In its whitepaper about the technology, Yoti claims that the AI can just estimate your age, but can’t identify you. The firm said it has trained its model from images of users across the world who have consented for their data to be used for research.

The third way to verify your age is named Social Vouching. This method involves three of your friends aged 18 and above who need to vouch for your age, and they can’t be vouching for anyone else at that moment. The company said that the vouchee gets the list of six people randomly with no family member on it.

The people you choose for this process will get a confirmation request, and they’ll have to address it within three days. The people vouching for you will get options to specify your age bracket such as under 13 years old, 13-17 years old, 18-20 years old, 21 years or older, or I’m not sure. All three of them must choose the same option for your age verification to be approved. 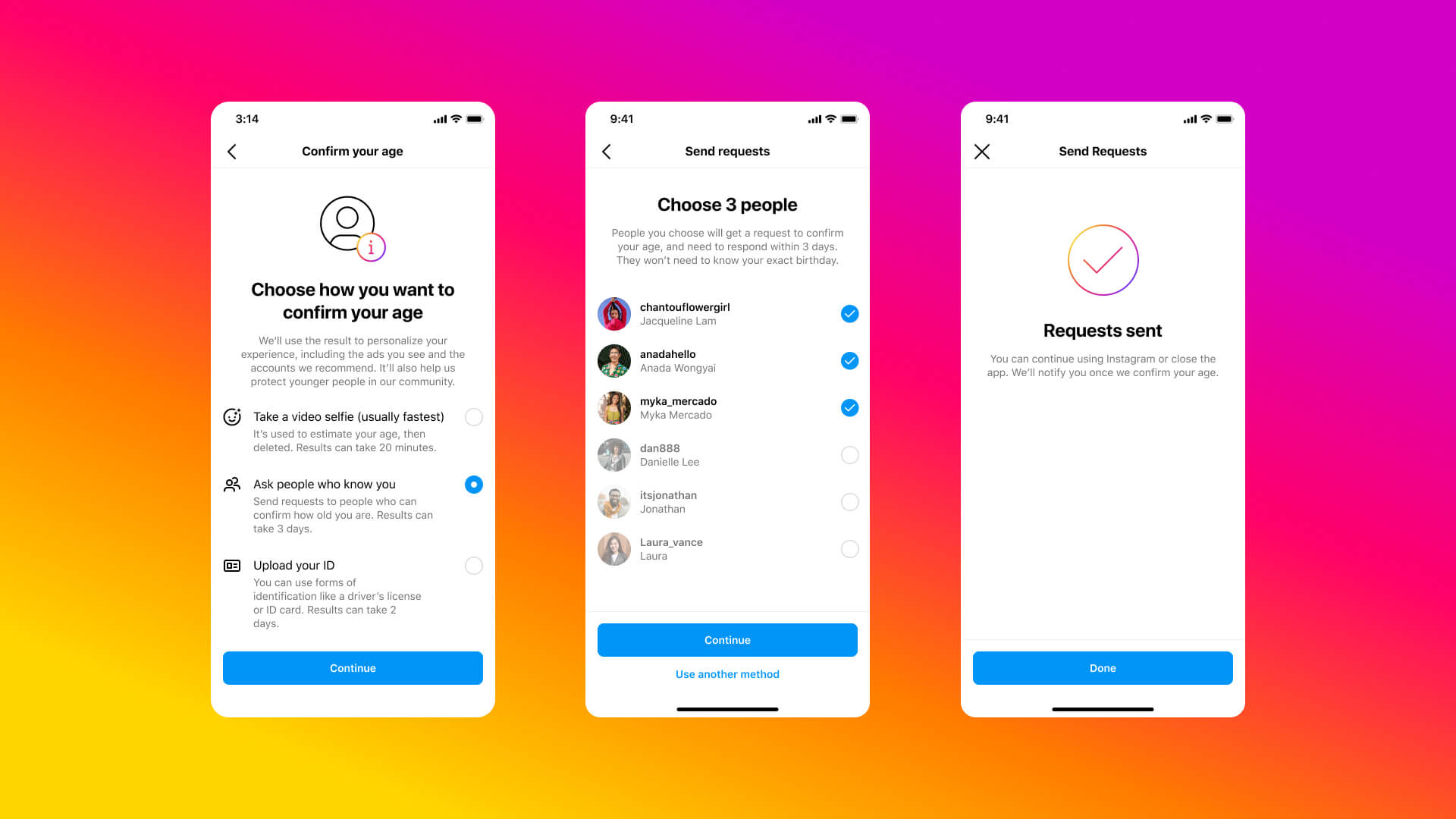 Meta said that all the information you provide for age verification is private, and it won’t be visible to anyone. The company also noted that devices and app stores should perform these checks so teens can have a safe experience across all apps and services.

“Understanding someone’s age online is a complex, industry-wide challenge. We want to work with others in our industry, and with governments, to set clear standards for age verification online. Many people, such as teens, don’t always have access to the forms of ID that make age verification clear and simple. As an industry, we have to explore novel ways to approach the dilemma of verifying someone’s age when they don’t have an ID,” the company said in a statement.

Meta added that it’s continuously developing AI to detect users who are lying about their age. While it doesn’t scan photos and videos, it looks for signals like birthday posts to identify the true age of a user. The AI also helps the company keep the teens away from experiences for adults like Facebook Dating and  Mentorship.

Instagram first introduced an age check by asking for birthdates during registration in 2019. Later in 2021, it made it mandatory for everyone to provide their birthdate.

The same year, it launched restrictions for teens like making accounts private by default for under-16 users, blocking DMs from unknown adults, and stopping advertisers to serve targeted ads based on teens’ interests and activities. Instagram’s rival TikTok also introduced similar limitations for users under 18 last year.

Last year, the Wall Street Journal reported that Instagram knew its platform affects the mental health of young users, but ignored its impact. After facing backlash, the firm took many steps like shelving its plans for developing a dedicated kids app and rolling out stronger parental controls. Instagram’s new age verification methods are another attempt to protect teens from harmful content.