The market for grocery delivery across Africa and the Middle East is worth over $50 billion. And Egypt, buoyed by a young and growing population, is a big market across both regions.

Investors are beginning to back their picks to capture a large chunk of the nascent but fast-growing sector, mirroring how things have played out in Europe and the U.S. this past year.

To that end, Breadfast, an online grocery delivery company that wants to become a regional leader in the sector has raised $26 million in Series A financing from an impressive group of investors. They include lead investors Vostok New Ventures and Endure Capital and participating investors JAM Fund (led by Tinder co-founder Justin Mateen), YC Continuity Fund, a large unnamed Saudi-based fund, Shorooq Partners, 4DX Ventures and logistics giant Flexport.

The investment is coming two years after Breadfast raised a $2 million pre-Series A round. In total, the Egyptian on-demand delivery company has secured more than $30 million.

The story of Breadfast started in 2017 with bread and bakery when Mostafa Amin, Muhammad Habib and Abdallah Nofal conceived the idea for an on-demand bakery service that delivers freshly made bread and pastries to customers. Now, the company has evolved into a full-on online grocery store with more than 2,500 SKUs.

In a call with TechCrunch, CEO Amin said the founders started with bread because it was the “most basic food unit in an Egyptian household.” They called it Breadfast Tomorrow and it was the company’s first model, delivering bread the next morning after customers made their orders.

Breadfast employed a mix of improved customer experience (from what customers expected from traditional players) and a native supply chain process to gain entry into the market, said Amin. He noted that the company was one of the early adopters of operating a native supply chain globally before the arrival of rapid online grocery delivery companies such as Gorillas, Jiffy and Flink. In 2017 when Breadfast launched, the more prominent companies either used marketplace or aggregator models: think Instacart and Postmates.

“When we started pitching to investors in 2017, they thought we were crazy and were like ‘We’re not going to invest in your company because you guys are doing an asset-heavy model. Why not do a marketplace model and go and aggregate from the bakery shops all over Cairo?” the CEO recounted. 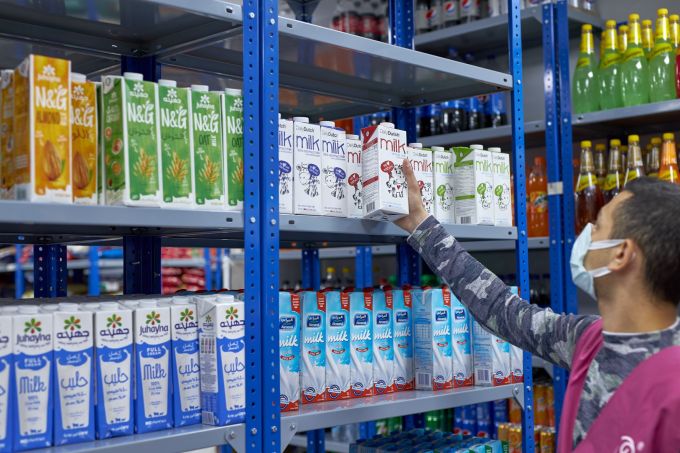 Fast-forward four years and rapid on-demand delivery is one of the hottest startup sectors in the world. It has changed how people consume their daily essentials with companies using micro-fulfilment points and asset-heavy models to make quick deliveries under 10-30 minutes.

For Breadfast, the journey to reach the point where it could facilitate fast deliveries took some meticulous planning. After providing next-day delivery for bread, the company began to add more products (supermarket items such as coffee, dairy, meat, fruits, vegetables, personal hygiene products and some electronics, turning into an online supermarket).

Then upon graduating from Y Combinator’s summer batch in 2019, Breadfast finally built its micro-fulfilment points and switched its delivery time to 60 minutes.

Now, Breadfast oversees every part of its supply chain. The company owns some of the products it distributes (like bread and coffee), sources other goods from FMCGs such as Unilever, Pepsi and Coca-Cola while distributing them across its web of dark stores and operates last-mile delivery to customers.

With all it needs in place, Amin said the company is looking to accelerate its delivery time to 20 minutes in a couple of months after the company upgrades its infrastructure.

“We’re trying to build Gopuff for Africa and the Middle East in a nutshell,” he remarked.

Breadfast currently serves 170,000 households in Egypt with more than 2,500 supermarket items. It claims to have more than a 65% customer retention rate month-on-month; revenue has also grown 4x from 2019 to 2020.

Amin said the company is targeting to deliver 6 million orders in Egypt in the next 12 months. Part of what will drive that is using the investment to expand across eight cities in Egypt, scale its technology and grow the team.

“In a couple of months, the total number of dark stores Breadfast is going to operate will be between 40 and 50 in Egypt,” the chief executive continued.

According to Amin, the more than 1,500-strong company (including riders) is also looking southward on the continent into sub-Saharan Africa. The CEO said Breadfast might enter one of the region’s markets in the next two months; however, he didn’t mention which country.

Next year, though, the Egyptian company plans to go all out across Africa and the Middle East and is expecting to close a Series B round to that effect. In two years, Amin projects that Breadfast will have almost 500 dark stores across both regions.

In reference to the company’s plan to expand its on-demand grocery delivery across Africa and the Middle East, the investment manager at VNV Global, Björn von Sivers said, “Over the past few years, Breadfast fueled its growth by offering something that’s highly scarce in emerging markets; an exceptionally good customer experience and solid operational excellence. We see Breadfast becoming one of the most successful companies to come out of Africa and the Middle East.”

Though Breadfast is the most-funded local company in the sector, both in Egypt and sub-Saharan Africa, Amin knows competition similar to what markets such as the U.S. and Europe have will take place on the continent. Already, local newcomers such as Appetito, GoodsMart, Rabbit are pulling their weight despite the presence of more established regional players like InstaShop.

“Egypt now is one of the hotspots for Africa and the Middle East, so everyone is taking a deep look into the market,” said the CEO. “But we’re very excited about the competition because, at the end of the day, it’s something good for the customers and also keeps all the companies trying to be innovative, competitive, and better every day.”

Allbirds prices IPO above range, putting more points on the board for DTC startups